Not Only Is America In Full Retreat Around The World, War Is Coming

Unless The Obama White House Makes Dramatic Changes To Policy, America Will End Up In A War Soon

After years of hearing lectures about 'cowboy diplomacy' causing wars under the former President George W. Bush, we're now on the brink of wars caused by craven American weakness. 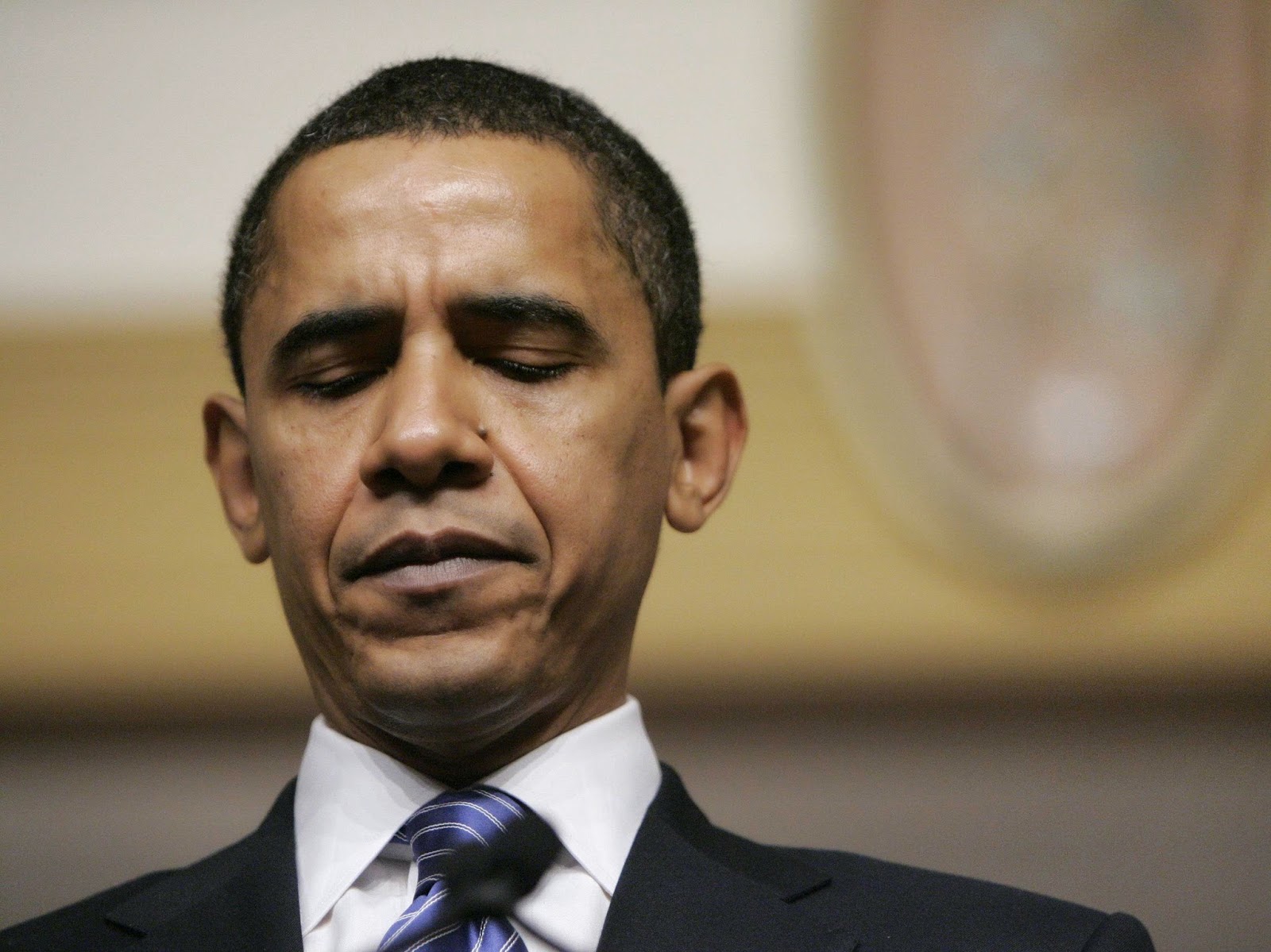 Even Obama's staunchest defenders are having a hard time covering up the fact this President has no coherent foreign policy.  Beyond engaging in a lot of happy happy talk to defuse the growing crises around the world and getting them off the front pages so as to win the present news cycle, Obama's inner circle has no real policy.

Take the recent Yemen disaster, which has already receded from public consciousness after being successfully managed in the press.  With weeks to prepare for a pull out if needed, when the moment came our Marines & diplomatic personnel were required to rush to the airport in the hopes they would be allowed to leave by catching  a commercial flight out of the country.  A situation with dozens of Americans being held hostage could have easily developed.  An Iran Hostage Crisis 2.0 was a real possibility. 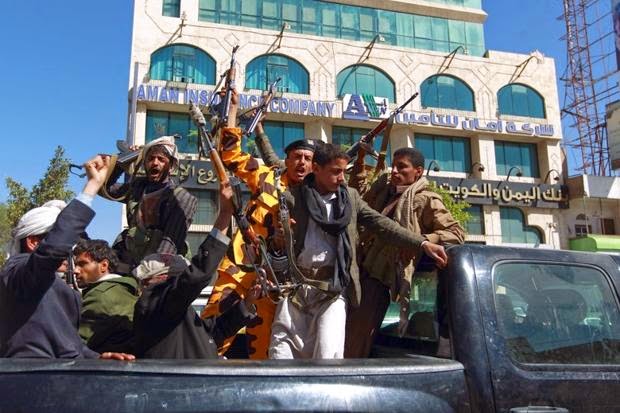 The administrations spokespersons just kept their faces bland and droned on for days: the pull out went exactly as planned and it was executed beautifully.  Eventually, as the White House knew it would, other events overtook the news cycle and everyone moved on. Kayla Mueller was killed. ISIS started burning it's hostages alive.

Thus is this administration's abject incompetence in foreign affairs kept from any real accountability: they simply wait for new crises to pull everyone's attention from the last mismanaged crisis.  It's winning through failing on such a massive scale there can't be any sufficient reckoning of one particular failure.

The State Department's unenviable task is to take what is an incoherent foreign policy that is on fire and getting too hot to handle and convince the media and the Americans who watch it that things have never been better and they have never been safer.

Marie Harf & Jen Psaki were elevated to their roles at the State Department because in 2012 Obama expected it to be All Quiet On The World Front now that he'd been reelected and could focus on what he saw as the greatest pressing need of his second term: squeezing the last political gains possible out of the Global Warming fraud before it's entire house of cards collapsed.  The political Left has invested much in the Anthropogenic Global Warming scam for almost two decades now, and with the window closing on getting any more of the political changes that it desires on the basis of this junk science, Obama fully intended to maximize any remaining gains to be had. 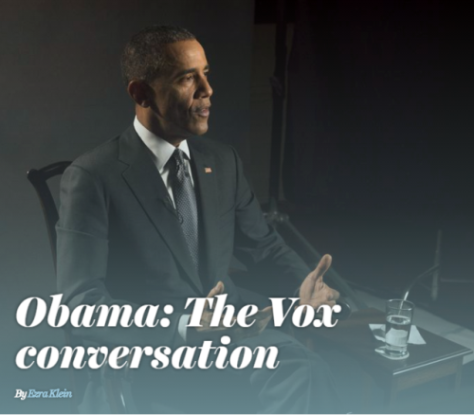 But as it has throughout this president's entire tenure in Washington, the world beyond America's borders has not cooperated with Obama's expected vision of it.  While he's made it clear he wants to talk about the threat of Climate Change, terrorism driven by a fanatical Islamic extremism keeps intruding on the world stage and demanding his attention.  It has gotten to the point that Obama lamented in a recent interview with Vox that he wished the American media would quit playing up the dangers of terrorism and making it seem worse than it really is because it means he can't devote the needed time to other more pressing issues, such as global warming and income inequality. 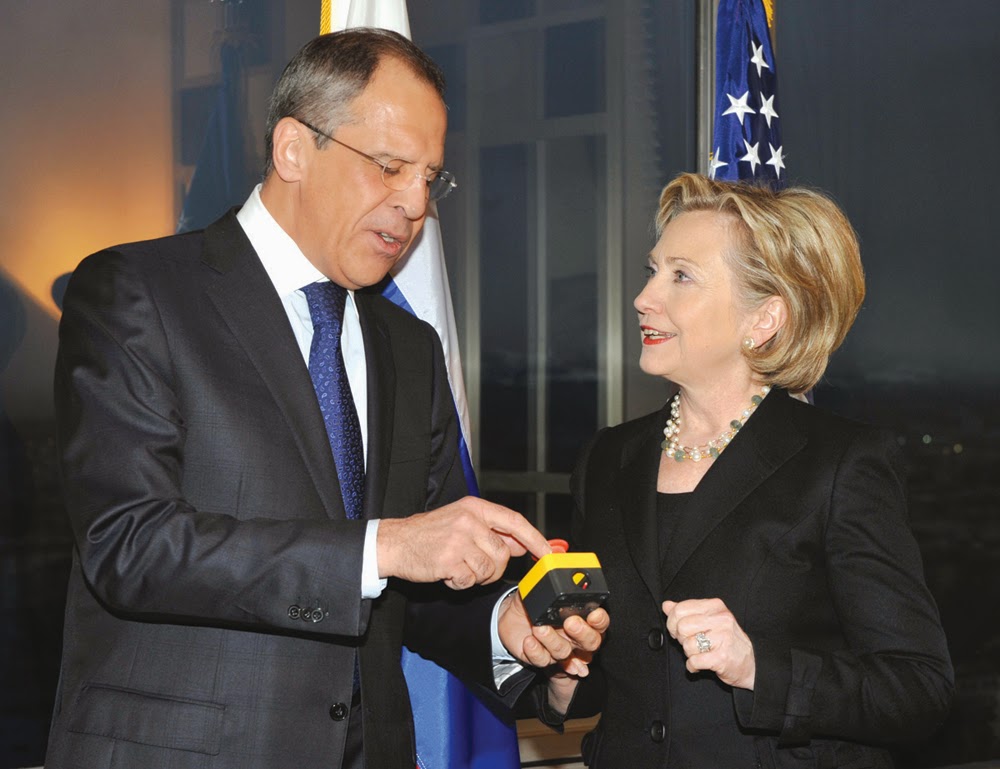 Bad decisions Obama made early on in his presidency have now borne their bitter fruit. He decided to do away with Bush's sanctions on Russia following the Georgia invasion, sending out Hillary with that now infamous 'reset' button.  Knowing a rube when he saw one, Putin could hardly believe his luck when Obama wanted 'space' to get reelected & promptly reneged on Bush's promise to the Czechs and the Poles on missile defense systems.  Putin reciprocated by muscling his way in after John Kerry's gaffe in Syria to keep Obama from enforcing his own red line on Assad's use of weapons of mass destruction.  Thus did Obama lose an incredible amount of his credibility in the world's eyes while Putin defused a situation that threatened one of his biggest client states. 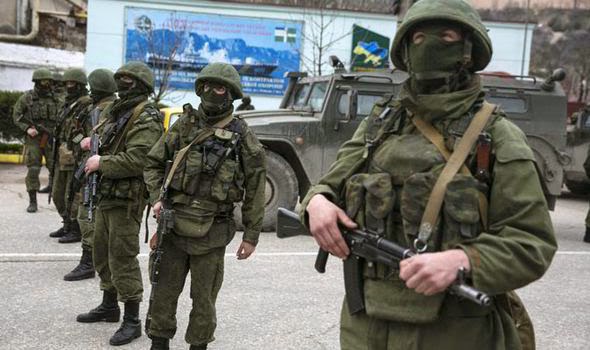 Having decided he'd given Obama enough 'space' following his reelection, Putin embarked on his present Ukrainian adventure, annexing Crimea and invading his neighbor to the West.  Once he has Ukraine well in hand, it's not exactly a secret that Putin intends to pull the Baltic states back into his new Russian Empire.  It's only a question of which one he goes after first.  He knows he has a limited time until Obama is out of office and the American ship might be under the control of a firmer hand.  So he won't wait long. 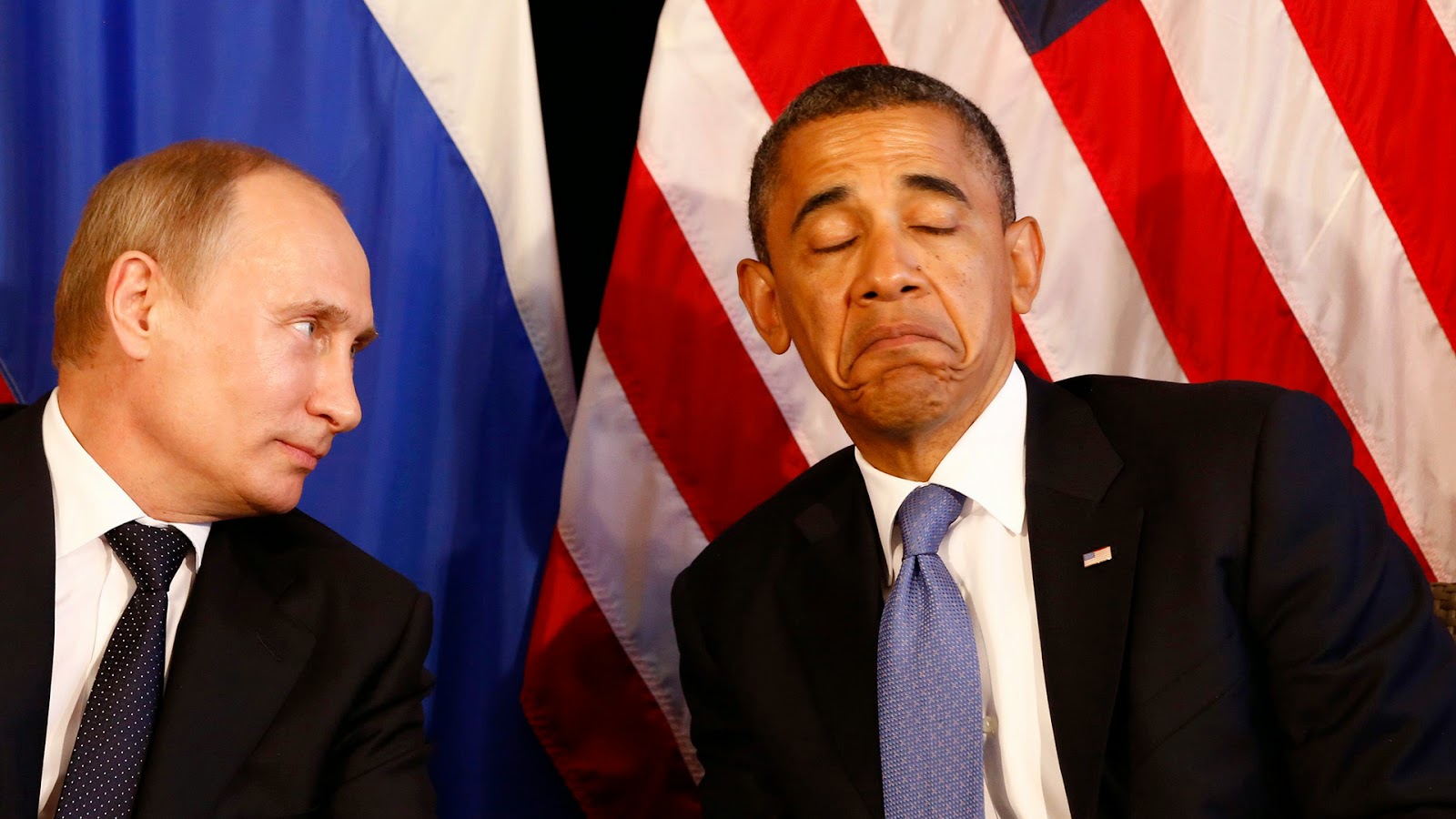 How far will America and Europe let Putin go? Any red lines drawn by Obama would be worthless at this point.  It is known that he would never enforce them, certainly  not with military action in the Eastern European theater.  But if our allies in Europe find their backbone & draw such a line, and Putin crosses it, America could have to jump in to support those trying to restrain Putin's conquering impulses. 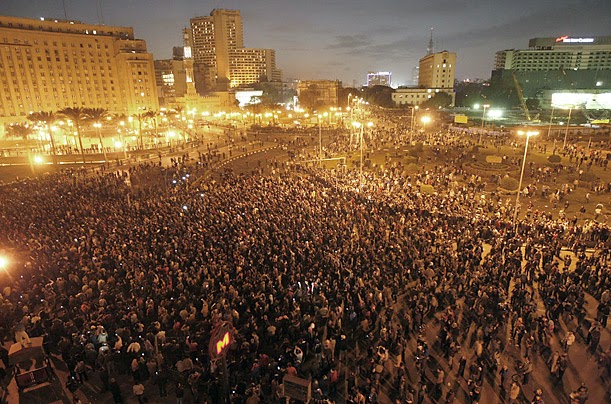 Turning for a moment from Europe, we find the Middle East in complete turmoil.  The Arab Spring for which Obama leapt to take credit for is now in it's Winter Nightmare.  The disastrous ousting of Mubarak from Egypt & replacing him with the Muslim Brotherhood was an utter failure.  Going into Libya to take down Ghadaffi  was even more of a disaster, since after completely mismanaging the security of Americans in Benghazi, the Obama White House completely abandoned the country after 9/11/12, leading to a failed state in which ISIS is now free to operate. 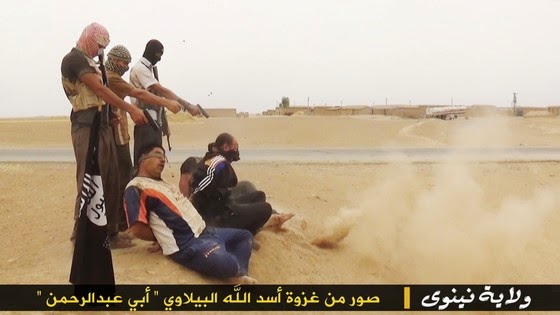 Which brings us to Iraq and the rise of ISIS.  Following the complete pull out of all American troops after Obama didn't feel particularly compelled to avidly negotiate for a SOFA with the Iraqi government, and a Presidential campaign in which Team Obama roundly castigated Republican challenger Mitt Romney for saying some American troops should have stayed to secure US gains in the country, we are now confronted with ISIS.

Surprisingly enough, once Obama was sufficiently motivated to negotiate a SOFA with al-Maliki, lo and behold a SOFA was quickly forthcoming, and US troops began returning in an attempt to deal with a situation quickly spiraling out of control.  After Obama derided them as the 'jayvee team', in less than a year after Obama's mocking of them ISIS managed to seize a third of two different countries, Iraq and Syria, and evidence now indicates ISIS activity in a third, Libya. 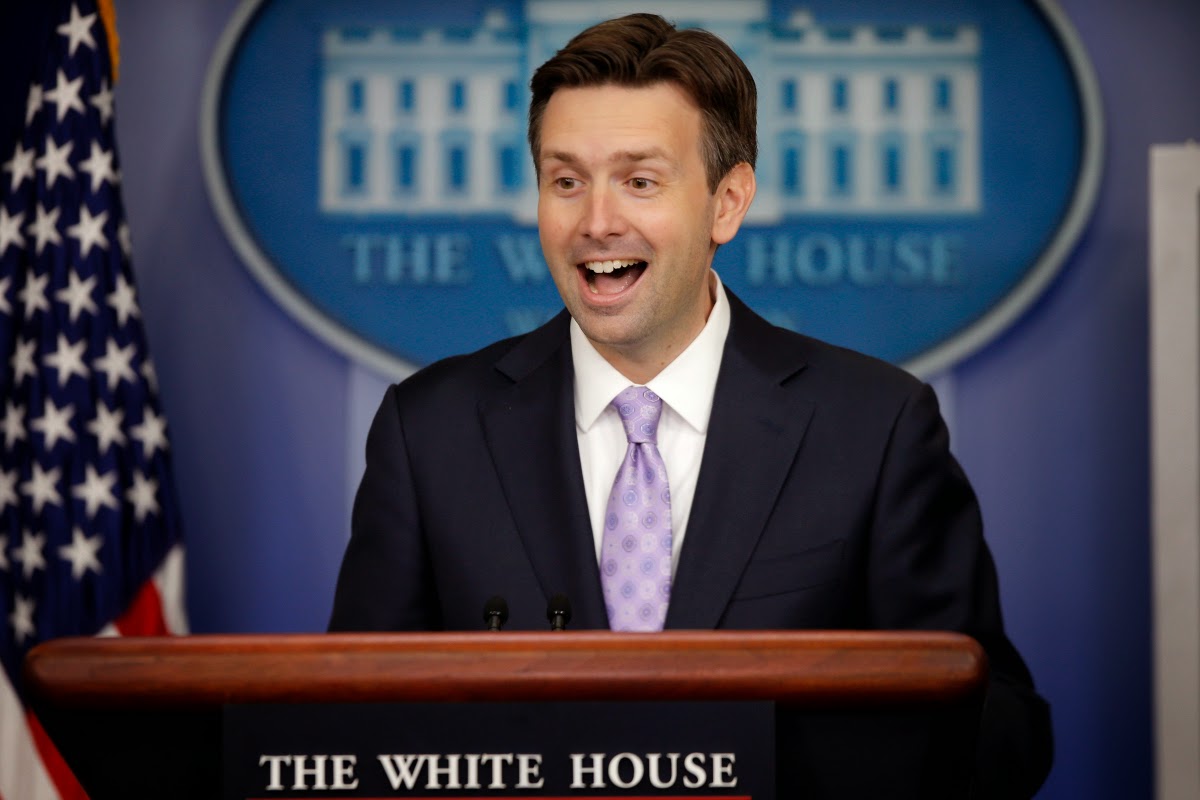 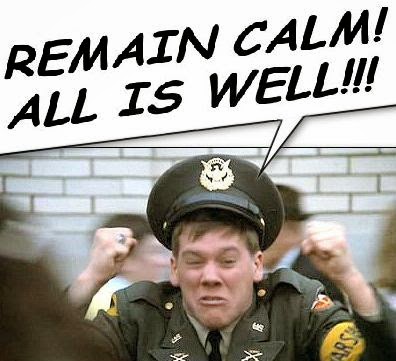 While the White House continues to blather that ISIS is contained, being degraded and is shrinking, the facts on the ground continue to say otherwise, that the threat is growing. Radical fanatics the world over are streaming to the region to join the Islamic State, and it's becoming increasingly clear a diplomatic solution with this group is impossible.  Someone is going to have to go in wipe them out, it's merely a question of whether that will be an Arab coalition with or without America taking part.

As the threat continues to grow, Obama has remained insistent that US combat troops will not be committed to this fight, that the US will remain in a support role only.  As ISIS continues to outstrip & defy Western expectations of it, it's not hard to see how the situation could escalate to the point American troops end up at the forefront of it, Obama's preferences notwithstanding.

And then there's Iran.

As I stated at length on Twitter recently, Israel is not going to allow Iran to reach the point where it can put together a functioning nuclear weapon, much less put a nuke in a missile.  Obama's #1 foreign policy job in the Middle East since he took office has been exactly this: to prevent Iran from getting the bomb.

And very early on in this administration, it was decided the cost of taking real action to prevent Iran's going nuclear was far too high, and so a policy was adopted of accepting a nuclear Iran & working to bring the rest of the world into an acceptance of it. 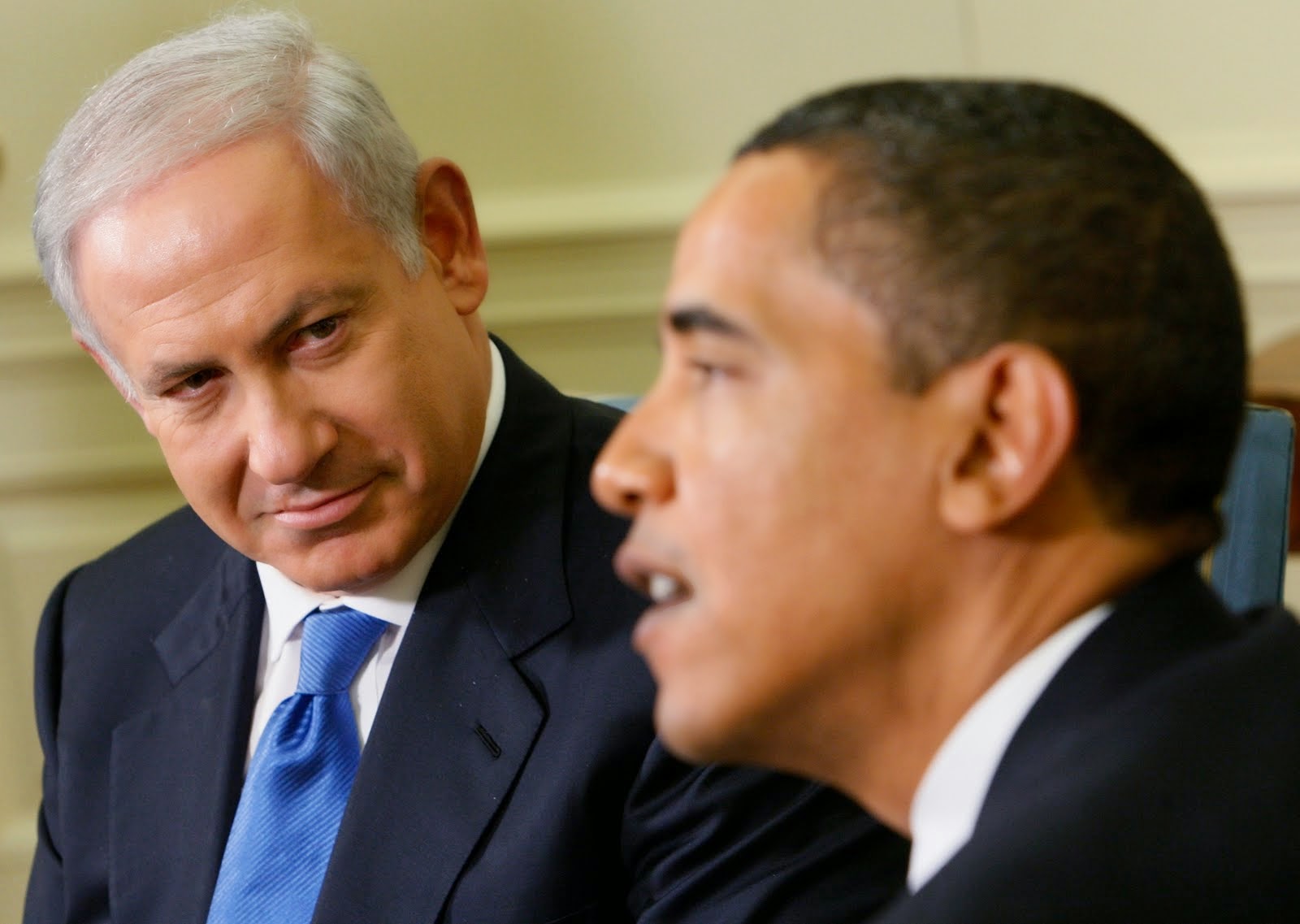 Far from doing everything in his power & marshaling allies to surround Iran with sanctions that will prevent further nuclear development, Obama has accepted what he views as 'inevitable'.

Thus has Obama for six years embarked on a policy of talking to Iran while lifting sanctions and fighting the implementation of any new sanctions as Iran strides resolutely towards it's goal.  Obama fully expects to spend the next two years of his final term talking it out with Iran, as well.

The problem with Obama's decision to let Iran have nuclear weapons is that Israel is never going to allow it.  The fact that must never be lost sight of is this: there is a trigger point in which Iran is close to a bomb in which Israel will strike them to prevent further development of a nuclear weapons program. 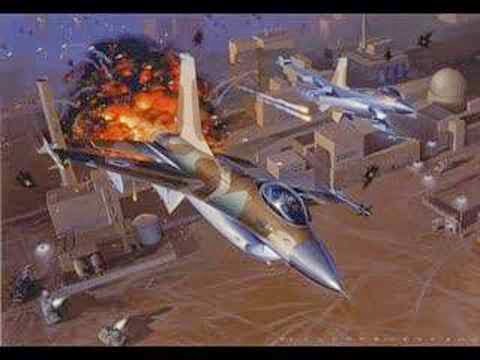 It must be recalled the lengths to which Israel went to strike Iraq when Saddam Hussein approached just such a trigger point in his own development of nukes.  Israel bombed Iraq's nuclear reactor in 1981, not caring one whit at the calumny from the rest of the world it incurred for taking such action.

Obama's job was supposed to be continuing the past American foreign policy of using whatever means needed to keep Iran from getting close to that trigger point.  He has utterly failed at this, and so Netanyahu is bypassing Obama to make his case directly to the American Congress.  The window for stopping Iran's nuke program before Israel is forced to take military action is closing. 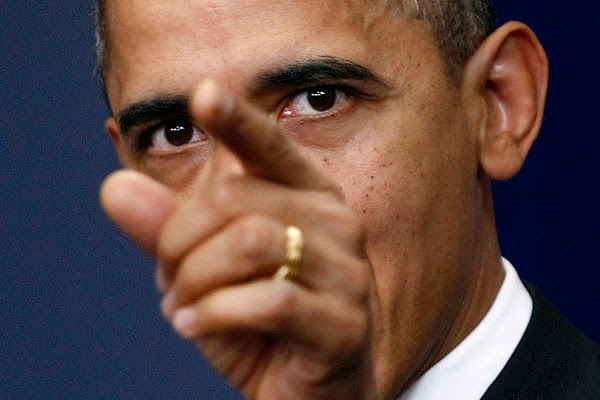 Obama is calling for all Democrats to skip Netanyahu's address to the Congress on March 3rd.  He is determined to prevent any tough action on Iran, convinced that his appeasement strategy is going to pay off if only he's allowed to stick with it.

Make no mistake: Israel is still firmly committed to the Begin Doctrine, in which it will not allow hostile neighboring states to possess nuclear weapons.  Netanyahu has tried to make it crystal clear to this current American president what Israel will do if something is not done to halt the Iranian nuclear program.

If Israel strikes Iran, all hell is going to break loose in the Middle East. War will be declared, and it's eminently possible for the United States to end up being involved.  Given what I know of Obama & UN Ambassador Samantha Power, if Israel does strike Iran, it's very possible they lead the world's charge to punish Israel.

Obama is disinterested, disengaged, and is running the clock out on his final term, so he has no wish to get tough with Iran, ISIS or Russia.  We are living in increasingly dangerous times. All three situations - Iran, ISIS & Russia - could blow up at any time, resulting in war.

Unless there's a drastic change in policy in this White House, the next two years - and beyond - could be very bad indeed.
Posted by Brian Cates at 6:06 PM