Restoration Or Annihilation:
This Is The Choice Conservatives Face
In Trump Vs. Cruz 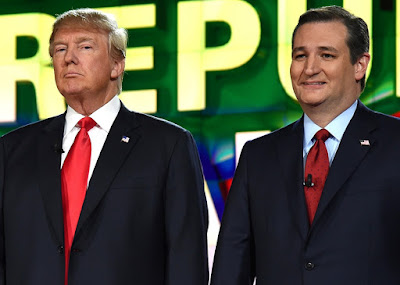 You Either Want To Restore This Constitutional Republic Or Scrap It For Something Else.  Which Is It?

At this stage of the race, halfway through the month of April, it's clear now what the choice is American Conservatives face in this 2016 Presidential race. At their core the two main candidates have clearly revealed who they are. 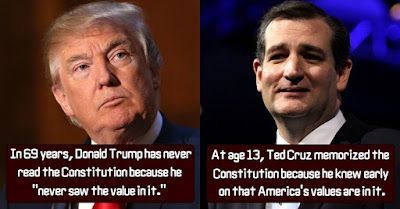 Donald Trump is running now as being exactly what he is: an authoritarian strong man who, like Obama, if he sees the Constitution at all, sees it as only a barrier to be shoved aside when it gets in his way.  Trump never mentions the Constitution or Obama's manifest abuses of it unless he's directly asked about it, and it's clear from his short, disinterested answers the subject quite frankly bores him. 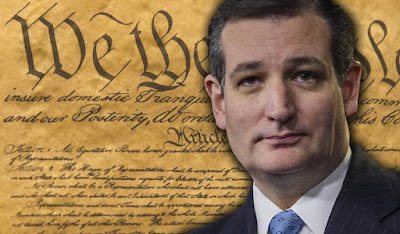 Contrast this with Ted Cruz, who is running as a Constitutional Conservative who has an extensive track record behind him of caring about and taking action on behalf of preserving, protecting and defending the US Constitution against those who attempt to undermine it & the rights & liberties it guarantees the American people.

Unlike Trump, Cruz understands what it is that makes America great.  America's Founders created a governmental system based on God-given rights in which all citizens are equal before the law. They enacted and enshrined this system at a time they fully recognized they were not living up to it, as I explain here.  They created a government of three separate but co-equal branches, a Congress, a Supreme Court and a President, each one designed to fulfill a specific role and serve as a check and balance to the other two. 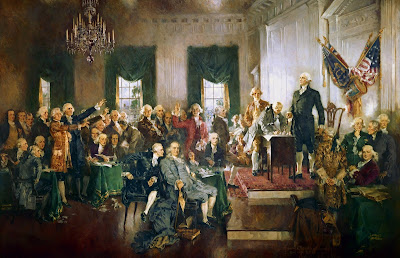 The role of government, as the Founders saw it, was not to enlarge it's own power to benefit itself or one particular class of citizens over another. Instead, the role of government was to be limited to helping citizens secure & enjoy the rights & the liberties they received from their Creator.

The Constitution is a document written with two main ends in mind: enumerating the rights of American citizens and defining and very specifically LIMITING the role of the government in the lives of those citizens.

The Framers set up their government in this exact way because they had just LEFT a European continent where monarchies and class distinctions were the order of the day.  Rights were whatever the current strong man on the throne said they were. Your liberties were whatever your betters decreed them to be at the current time.

As any reading of the Federalist Papers will quickly demonstrate, the Founders were explicitly aware of what they were discarding and rejecting from their European brethren as they formed their new government. 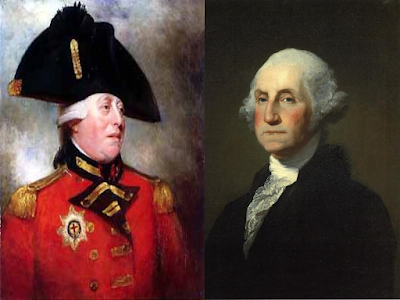 I'd like to take this opportunity to thank all my new Alt Right Trump-Humping friends on social media who spent the last few months reminding me why Americans shit-canned King George for George Washington.  You guys have been swell!

They purposefully set about creating a government about as far away from European monarchy and it's raw exercises of power as can be imagined.

This American system IS what made America great. The incredible amount of freedom, liberty & prosperity American citizens have enjoyed in her history is a direct result of the Founders efforts.

And America will not be returned to that greatness until the abuses & corruption of Progressives like Obama have been reversed and rolled back. 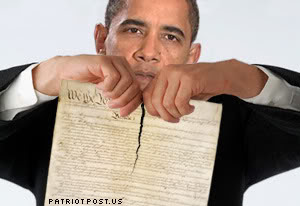 Donald Trump is not the guy to repair the damage Obama has done to our Constitution.

This is the task all those who value America face: the restoration of this Constitutional Republic. Getting our government working again FOR all the people, as the Founders intended.

Listen to Cruz as he's campaigning on the trail these last few months. This is EXACTLY what he talks about doing, achieving this restoration, fixing the Federal Government so it'll stop catering to an elite political class as it strips rights and liberties from the rest of us.

Trump isn't promising a return to the American Constitutional Republic; far from it. What he's promising is to go even further into exercises of raw naked power from the Oval Office that even Obama never dreamed of trying.  He has no respect for our Constitution and clearly can't wait to get off the subject whenever it comes up. 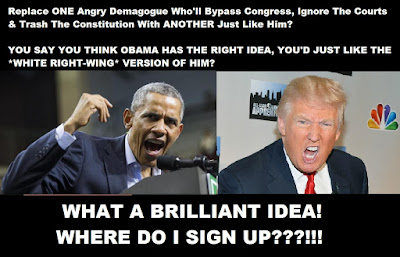 Now that the field has narrowed to a 2 man race [yes I see that hand waving there, I'm ignoring you like most of America, John Kasich!] the core differences between the two remaining candidates are being laid into a bold contrast.

I call upon all Americans to make their choice, and to choose wisely.
Posted by Brian Cates at 1:44 PM 3 comments: Links to this post